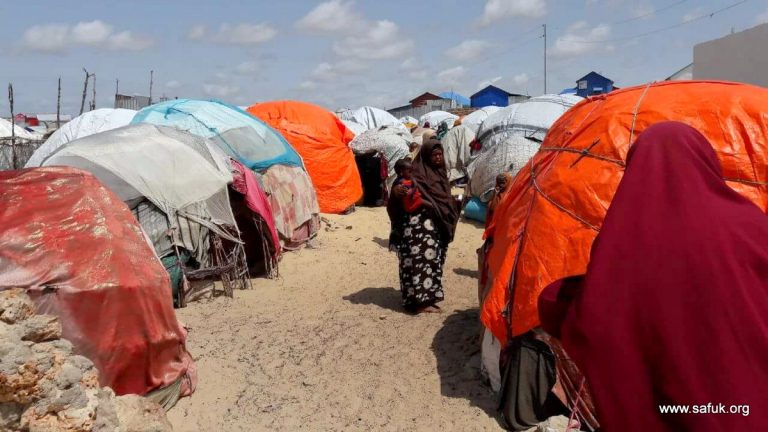 Somalia is a country reeling from decades of conflict, drought and famine. More than 1 million people are facing certain calamity with a fragile humanitarian situation occasioned by massive human displacement driven by war and worsened by regular drought.
Safia Bashir, 7 and her family fled their home in Jamame district in Lower Juba region of Somalia 9 months ago to escape a devastating drought which decimated livelihoods in the region. They trekked for kilometres before settling in Makomani village in Kismayo.

Makomani is one of the villages situated in Galbadeed (Alanley) IDP camp in Kismayo, Lower Juba region of Somalia. It is now home to hundreds of destitute households forced to migrate here to stay with their better off relatives, search casual labour opportunities and access humanitarian assistance.
Lucky for Safia, SAF-UK International conducted a community outreach to distribute Vitamin A and mass deworming in July 2018 in Dalxiska and Galbadeed IDP camps. She received a doze of Vitamin A and Albendazole for deworming.

One week later, SAF-UK team visited their home for a follow up. They found her mother waiting for them, bottle in hand. Inside was the huge worm Safia had thrown up days after taking Albendazole.

Safia is now on the way to full recovery. Her mother is very grateful for the assistance and thanked both SAF-UK and UNICEF as well as the Jubaland Ministry of Health for restoring the health of her child, saying:
My family has been through a lot over the past few years. The worst affected has been my daughter Safia. She has always been sickly and with a poor appetite even when food is available. We came to Galbadeed IDP camp in October last year to look for a better life than what we faced back at home. When SAF-UK staff visited our village in the community outreach drive, the village elders encouraged us to participate in the outreach. My daughter Safia received a dose of Vitamin A and she was also dewormed. One morning, she complained of nausea and when she finally threw up, we were shocked! She had just thrown up a huge worm! I collected the worm in a bottle. When the SAF-UK Community health workers visited us the following week, I had to show them the worm responsible for the poor health of my daughter.

Safia adds, ecstatically:
Now, I feel energetic and happy. I have regained my appetite after throwing up that nasty worm! My friends tell me that I have started gaining weight. I am grateful for the assistance the SAF-UK team provide in our village.
According to World Health Organization(WHO): Soil-transmitted helminth infections are among the most common infections in humans, caused by a group of parasites commonly referred to as worms, including roundworms, whipworms and hookworms. Those living in poverty are most vulnerable to infection which can impair nutritional status by causing:
internal bleeding which can lead to loss of iron and anaemia;
intestinal inflammation and obstruction;
diarrhoea; and
impairment of nutrient intake, digestion and absorption.
Evidence shows that preventive chemotherapy, or the periodic large-scale administration of anthelminthic medicines like Albendazole to populations at risk, can dramatically reduce the burden of worms caused by soil-transmitted helminth infections. However, long-term solutions to soil-transmitted helminth infections will need to address many factors, including improvements in water, sanitation and hygiene.